As it is already August and I haven’t yet written anything on the birds I saw on my trip to the Rockies in April, I thought I would do so now in a short, fun post of mostly photos of some birds from the mountains and valleys of the main National Parks we visited (Yoho, Kootenay, Banff and Jasper).

On a lovely hike to Wapta Falls in Yoho NP, a stirring in the bushes on a trail spooked me. Fearing a bear or some other large animal, I turned back to see this lovely Spruce Grouse much to my relief and surprise (and embarrassment that he scared me)! This was a new bird for me and I was quite happy to watch him hang out on the edge of the trail.

The trail to Wapta Falls is a good hike and it was a good alternative to Takakkaw Falls, which was still closed for avalanches back in April.

At Lake Louise, I delighted in watching a Clark’s Nutcracker among the Whitebark Pines and the people. To me, these birds are a symbol of the Rockies and I had high hopes of seeing one on my trip. Luckily, this one did not disappoint!

At Athabasca Falls in Jasper NP, I saw an American Dipper hopping on the rocks along the river below me. I’d only ever seen one of these before on the Qualicum River on Vancouver Island, but at the time I didn’t know what it was. So, I like to count this as my first official dipper sighting. The dipper hunts underwater in fast-flowing streams and rivers and are North America’s only true aquatic songbird (Cornell).

Athabasca Falls is a must-see stop for any trip to Jasper NP and even in April, there were many tourist buses parked up. Its a short walk from the parking lot to see the main falls and along the limestone potholes below.

En route to the beautiful Maligne Lake in Jasper NP is Medicine Lake. Medicine Lake is a very interesting geological feature on the Maligne River: there is no channel visible at the surface draining the lake. This is because the water drains out through the ground beneath it through sinkholes and limestone caves until it re-emerges in Maligne Canyon (Parks Canada).

Many of the trees surrounding Medicine Lake are blackened, crispy ghosts of a forest that once stood along this strange lake until a wildfire claimed it last summer. Among the charred remains of the forest, there is life. We spied a Bald Eagle nest in a tree just off the very left edge of my photo above. In the photo of the nest, you can see all the dead trees in the background. 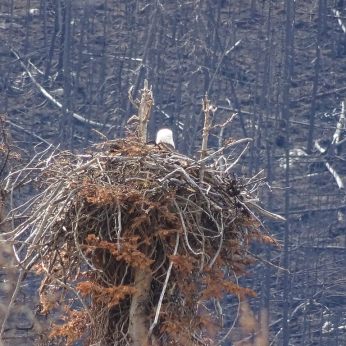 Our second try hiking the Valley of Five Lakes in Jasper NP after turning around for a grizzly bear was quite a success. Its a beautiful walk past lovely little kettle lakes, and as we’d started later than we planned due to our grizzly sighting we stopped for lunch on the way.

As we sat beside the crystal clear waters of the first lake, a Pileated Woodpecker hopped down between the rocks to my side. He looked a bit curious about us, but he got on with his drinking and had a little bit of a bath and graced me with these photos before he flew away to a nearby tree. I just love these guys and seeing one up this close was such a treat! 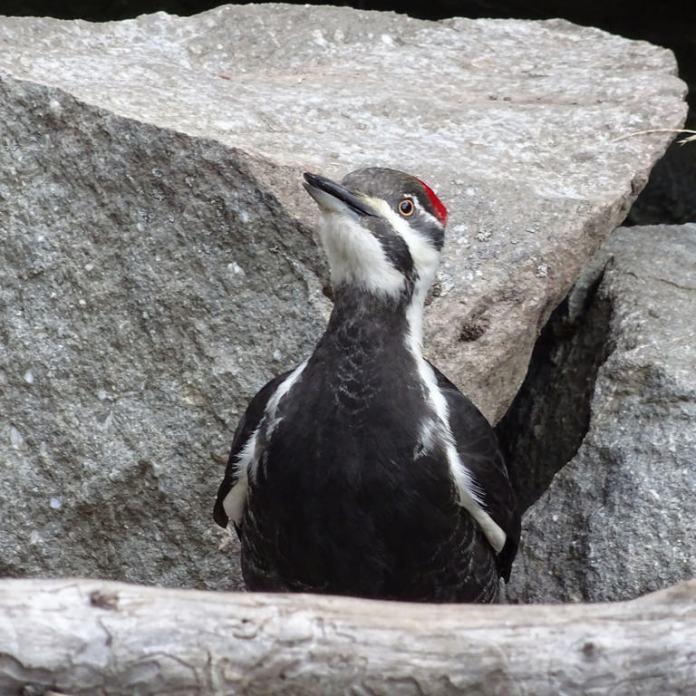 Stay tuned for Birding highlights of the Canadian Rockies: part 2 which will include some birds from the BC interior and other regions west of the mountains.

5 thoughts on “Birding highlights of the Canadian Rockies Part 1: the mountains and valleys”