The Bow Valley of Banff NP, which today provides a rich habitat we are familiar with, was once covered by glaciers and ice 20,000 years ago during a period of time known as the Last Glacial Maximum. Glaciers carved through the mountains, creating a U-shaped valley with a flat bottom and steep sides. These glaciers disappeared from the Bow Valley by about 13,000 years ago, beginning the development of today’s modern montane valley (Reasoner and Huber, 1999).

Canada’s oldest national park (established in 1887), Banff lies in the heart of the Rockies and the town of 8,000 residents sits in Bow River valley. The Bow River is sourced from the Bow Glacier, part of the Wapta Icefield and flows into Bow Lake before joining the South Saskatchewan River. The Bow Valley provides important montane habitat for a wide variety of wildlife, from birds and small mammals like squirrels all the way up to grizzly bear and elk.

With wetlands, grasslands and open forest, an alpine montane ecosystem like the Bow Valley lies below the subalpine zone and is generally warmer and snow-free in the winter, providing habitat for a large range of animals (Parks Canada). Unfortunately, the montane is also an area humans prefer to occupy, putting constant pressure on wildlife in the region.

Across the Bow River from the Vermillion Lakes, the Cave and Basin National Historic Site marks where the Banff Thermal springs were discovered and the location of the original baths. The water from the thermal springs provides a niche habitat for species not found elsewhere in the area, including killdeer, garter snakes,  introduced tropical fish and the endangered Banff Springs Snail (Parks Canada).

In the wetlands and lake below the cave, we were lucky to spy what we thought was a beaver in the water. Now I am not sure if it could be a muskrat. We spied his body moving through the water and then he climbed up on shore and began eating some twigs for a while before eventually moving away out of sight.

A beaver or muskrat (I am no longer sure!) in Banff NP, AB in the wetlands below the Cave and Basin Historic Site. 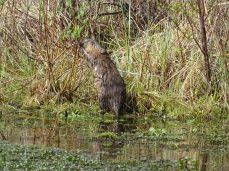 Among many other birds, I was pleased to spy a White-Winged Crossbill in the trees, a new bird and first sighting for me.

Around the town and the Bow Valley floor, Columbian Ground Squirrels were a common sight. Unlike tree-dwelling American Red squirrels, these ground squirrels dig burrows underground where they spend winter. Without the lush, warm habitat of the Bow Valley montane or the microclimate of the hotsprings, none of these animals would thrive in the cold Rocky Mountains.